The 87th FIS was at two different locations: Duluth Municipal Airport Minnesota from , and K.I. Sawyer AFB MI from as part of the 23rd Air Division. The 87th FIS was activated in November 1952 at Sioux City Airport. It replaced the Indiana ANG's 163rd FIS with F-51D aircraft. In the fall of 1953 it transitioned into F-86Ds and in December 1954 the unit transferred to USAFE. The squadron was transferred back to ADC at Lockbourne AFB in April 1956, again with F-86Ds and subsequently F-86Ls a year later in 1957.  The squadron transitioned into F-102As in late 1958 and in June 1960 the F-102s were exchanged for F-101Bs.

In May 1971 the 87th FIS moved from Duluth AP to K.I. Sawyer AFB, MI replacing the F-101 equipped 62d Fighter Interceptor Squadron at K.I. Sawyer, which was deactivated in Apr 1971.

In April 1978 the 87th Red Bulls deployed to Keflavik Iceland to assisted the 57th FIS with Alert duties as that unit transitioned from F-4Cs to F-4Es.

The 87th FIS was deactivated on 1 Oct 1985. The Red Bull lived on however for several years after as the 87 FITS, a training squadron.

RED BULL Insignia
When the 11th FIS deactivation, and the 87th activated in its place, it retired the 11th FIS Red Bull insignia. The new 87th FIS Red Bull insignia, however took many (most) of its cues from it and thus looked 'very' similar retaining the Red Bulls name and the basic Red Bulls design. Capt Dick Stultz, F-106 pilot and artist, was designated by the 11th Commander LtCol Tom Liner to do a new design with a renewed Red Bull. The AF did not fully use Dicks design which had more streamlined yellow lightning bolts and meaner, larger looking Bulls eyes - But, what the Air Force Heritage Office came back with looked more like a grade school color paper cutout, changing Dicks design a but and NOT what they thought they wanted. The old 87th design they were 'supposed' to adopt was a purple-black-gray-yellow (UGLY) profile of the city of LOCKBOURNE!!!! to be better memorialized in case of WWIII Nuclear obliteration!! Needless to say, the 87th insignia that was finally adopted turned into a proud heritage.

Commanders Aircraft "TORO ONE" As best I can recall, and asertain from the many photos and data collected, the following are the aircraft designated as the Commanders jet with the 3 red stripes named "Toro One".
59-0053
57-0231
59-0066 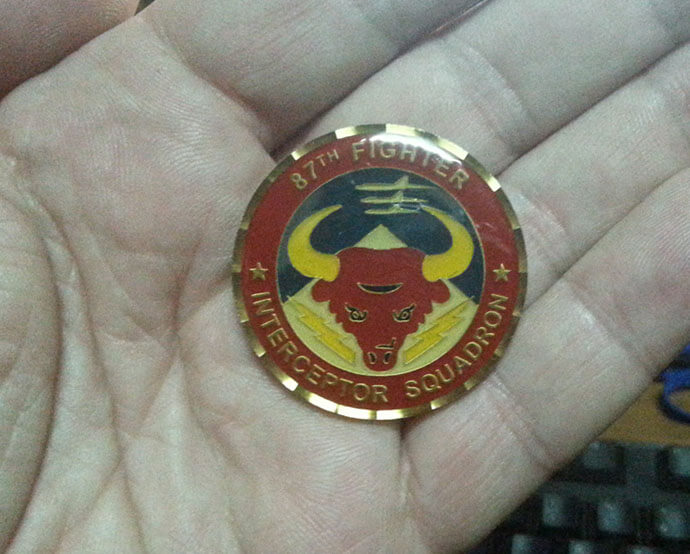