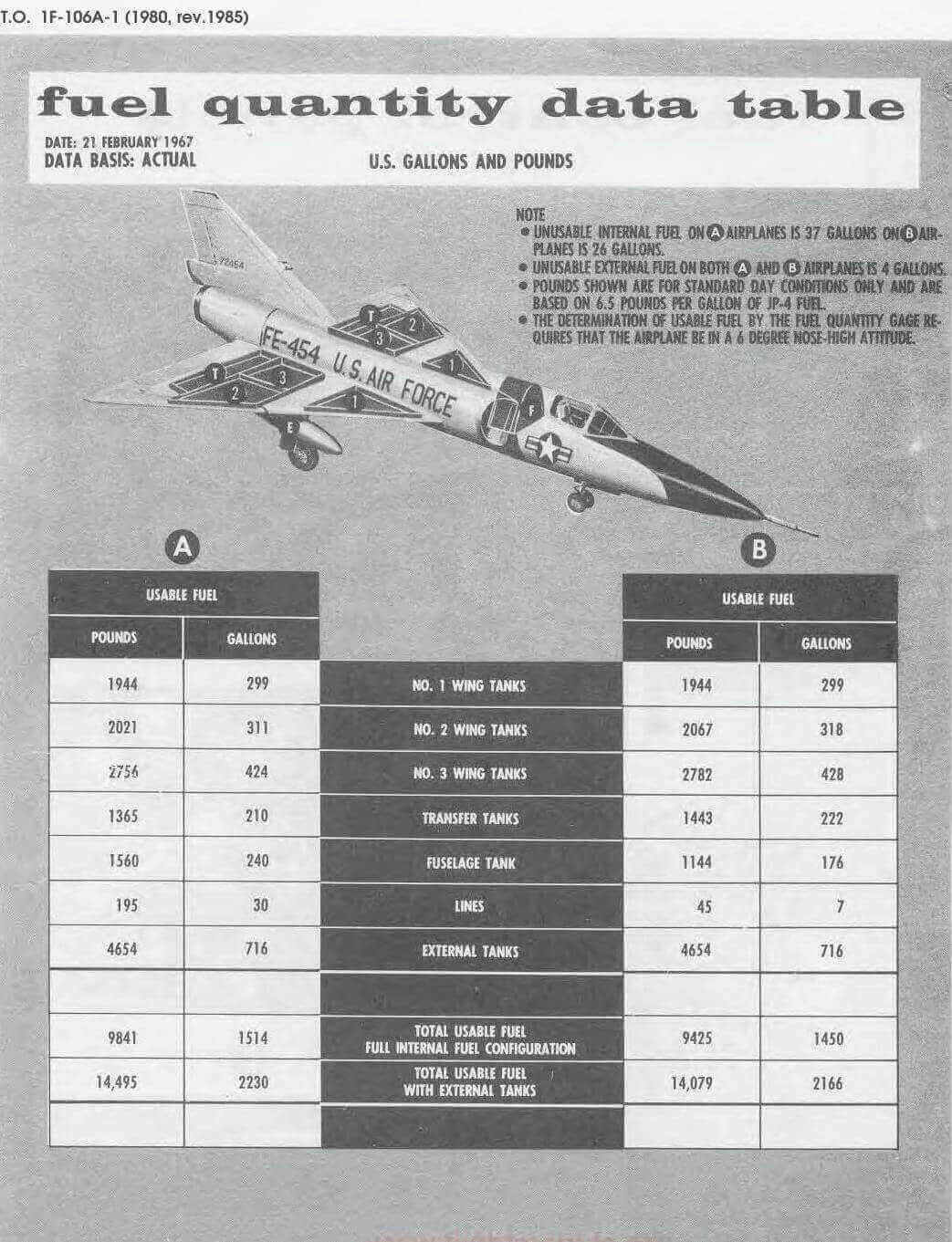 The F-106A has 2 wing tank systems which consist of 4 fuel tanks in each wing (3 main tanks, 1 ‘T’ transfer tank), a single 'F' (fuselage) tank located just aft of the cockpit and 2 external 360gal wing tanks, 1 under each wing.

To improve aircraft performance at supersonic speeds, an automatic fuel transfer system is installed to shift the cg (center of gravity) forward and aft under specific flight conditions. To facilitate this cg change as desired, fuel is transferred between the ‘F’ tank and 2 transfer tanks located along the aft wing sections.

The 3 main tanks in each wing function as an individual tank and the fuel systems in each wing operate independently of each other. The pilot cannot transfer fuel from one wing to the other. All internal fuel tanks are Integral type composed of airplane structure and are not self-sealing.

Fuel tank capacities are listed in the table below. These quantities are exact, however could have varied due to temperatures, fuel probe tolerances and fuel gage tolerances.

The F-106B has the same fuel system design and number of tanks, however different fuel capacities.

Fuel is supplied under pressure from each No. 3 tank by two electrically driven boost pumps through fuel shutoff valves to the engine fuel control system. These pumps were located in the forward-outboard and aft-inboard sections of each No. 3 tank. Boost pump inlets were located in the top and bottom of the fuel tanks to ensure fuel supply during all aircraft attitudes.

A fuel flow equalizer provided symmetrical fuel usage from the left and right-hand fuel systems. If the boost pumps failed, the engine-driven fuel pumps would draw fuel through a dual check valve inlet located on the outside of the boost pumps.

Fuel tank pressurization was provided to facilitate fuel transfer, to provide adequate fuel pressure to the engine fuel control system, and to prevent excessive high-altitude fuel vaporization. The fuel tank pressurization air was engine bleed air, which was pressure regulated and passed through the air-conditioning primary heat exchanger. For tank pressurization and to provide fuel flow through each wing tank system, air pressure enters No. 1 tank in each wing fuel system. As fuel is drawn from No. 3 tank by the boost pumps, the pressure differential between tanks forced fuel from No. 1 tank into No. 2 tank, which in turn forces fuel into No. 3 tank.

The fuel in the external tanks was transferred into No. 1 wing tanks by engine bleed air pressure, which was regulated at a higher pressure than the normal fuel system.

Normally, transfer of fuel from the external tanks to No. 1 wing tanks would not occur until the landing gear was up and locked. However, if needed, the pilot could transfer fuel with the landing gear down by placing the External Tank Emergency Switch to the ON position, which then had to remain in the ON position until the external tanks were empty, otherwise pressurization in the tanks would cause fuel to be vented overboard.

NOTE: Originally these external wing tanks were 230-gallon tanks, at least that's what they were always referred to although they were actually 227 gallons, which were limited to about Mach 1.25, although they were called sub-sonic tanks. Sometime around 1967 these were replaced/upgraded with the know well known 360-gallon supersonic tanks rated to Mach 2.0. These tanks became a 'fixture' on the F-106 as they almost always flew with them since these tanks did not limit the aircrafts performance under Mach 2. Some mission types that did not fly with the external tanks were Aerial Combat Tactics (ACT fighter vs.fighter) missions, previously called Aerial Combat Maneuvering (ACM), and Functional Check Flight's (FCF). Even the Alert birds carried external 360 tanks.

The internal and external fuel tanks were all serviced through an SPR, Single Point Refueling adapter, located on the lower right engine inlet duct fairing (right intake). The tanks were refueled in a reverse order from normal tank transfer sequence. Selective refueling of internal tanks was not possible. You could however, differentiate between all-tanks and internal only. If the refuel selector valve was in the OPEN position, all internal and external tanks would be fueled. However, if the valve was CLOSED only the internal tanks would be refueled.

The external tanks could also be refueled through a filler-cap on top of each tank.

In 1967 in-flight refueling capability was added to the F-106 with an IFR (In-flight Fuel Receptical) on top of the fueslage just aft of the cockpit. The mod took a few years to complete across the entire fleet of aircraft. Some of the first aircraft to receive the IFR mod were 318th jets at McChord. Partly because of this, the 318th was selected to fly to Korea during the Pueblo incident in Jan 1968, which required used of in-flight refueling. The F-106B has the same fuel system design and number of tanks, however different fuel capacities as shown in the table. At altitude 13,500 + or_500 ft. Mach 1.19 the the "F" Tank fuel would transfer Aft to the "T" Tanks in 20-25 seconds. Loss of one of these elements would atomatically transfer this same Fuel forward. The left console had a 3 position Fuel switch. AUTO, OFF and spring loaded TEST. In the Test position the "F" transfered AFT irrespective of the above conditions. Some Pilots apparently used this Test position in ACT/ACM for rapid "G" onset. They asked me to install a red guard cover over the switch so they wouldn't have to hold the switch. I said if you accidently pranged the A/C how would I explain who authorized the Red Guard. End of subject!

One thing of interest was the Supersonic Tanks were good all the way to Mach 2. That was an FCF requirement by the TCTO after the Tank installation.
--- Joe Sylvia

When we did the Air to Air Refueling Kit Proofing at McClellan, AFB we did it on the Proto Type A/C that was accomplished at San Antonio, TX. It was flown in from Kelly, AFB with all its raw installation of the A-A installation. Its purpose was to prove that it would work on the F-106. I had several Engineers and Tech Writers because we Kit Proofed an A Model and a B Model simultaneously. In addition to the GD/ Convair personnel we had Engineers and writers from Kelly AFB.

Some areas under the Pan assembly were so wide open Kelly just filled the gaps with Mil-S-8802 Sealant. Again this was just to prove the feasibility of the modification.

So now with the Kit proofing we had to undo this installation and design an installation that is compatible good engineering principals. All this took time and effort which turned out magnificent. We GD/Convair and Kelly would meet each evening to decide who pay for the required changes. Example: Stan Bering from Convair called me at home and questioned why Kelly AFB was paying for this expensive change. I told we (Convair Personnel) insisted that it was our responsibility but Kelly, personnel persisted it was there responsibility. I told Stan look at it this way except what we send you because in the long run it will even out. He agreed!

Now comes the gritty part, when everything was assembled we had to do a water check to make sure the structure didn’t leak fuel into the Hot Refrigeration Compartment. Well we all observed the installation and everything looked great except during the leak check water did leak into the Refrig Area. In fact, about the eight time I said I’m confident this it will work I climbed into the Refrig compartment with my white shirt and tie. They pressurized the water and everything looked real good except when I opened my mouth say its good, here comes the water---I got a good dowsing.

This repeat performance when on to about 13 times. This is when I believe it was Hugo Stein said looks like we’ll have to cancel this Mod. I said wait until I call Convair before you make your decision. I called Stan Berling and he said I’ll get back to you shortly. He called back and said—I don’t remember the man’s name---will be coming up on PSA flight arriving in Sacramento this afternoon around 4 PM with only a shaving Kit.

I picked him up and explained what was happening and then asked if he wanted to get a Motel room first and he said no lets go to the A/C first I think I know what’s the problem. We did that and he told them to disassemble the structure but don’t paint the bare metal with Zinc Chromate paint. At the time Zinc Chromate was used throughout the Aircraft industry as a corrosion preventative.

I picked him up the next morning and he applied a thin coat of –8802 to all the bare surface. WALLA----NO LEAK. He explained that -8802 is a corrosion preventative in itself. The Zinc Chromate didn’t have time enough to cure preventing the -8802 from sticking to the metal.

All Kit Proofing Mods all had numerous changes but in the long run they enhanced the 106’s capability which sustained its longevity.