The AIR-2A Genie is an air-to-air rocket with a nuclear warhead designed for use against formations of enemy bombers. It was the world's first nuclear-armed air-to-air interceptor weapon and consequently was the most powerful ever deployed by the United States Air Force. It has no guidance system and is powered by a solid-propellant rocket motor. The AIR-2, designated the MB-1 prior to June 1963, was first test-launched in 1956 and became operational in January 1957. On July 19, 1957, a Genie was launched at 18,000 feet from an F-89J interceptor and detonated over Yucca Flats, Nev. It was the first and only test detonation of a U.S. nuclear-tipped air-to-air rocket.

The AIR-2A was carried primarily by F-89J, F-101B and F-106A interceptor aircraft. After launching the weapon, the aircraft had to pull away in a sharp turn to escape the blast as shown below. Thousands were built for the USAF before production ended in 1962. The weapon stayed in service until 1986, by which time all of its carrier aircraft had been retired from service.

The Blue mid-fuselage and Red or Maroon mid-fuselage are inert trainers with no warhead or rocket motor.
The Brown skinny band around the forward end of the fueslage has a live rocket motor, which are the ones usually seen in photos being fired.
The   All-White   Genies are live rockets with a nuclear, or possible conventional, warhead and a rocket motor.

The AIR-2B Super Genie was an advanced version of the rocket. 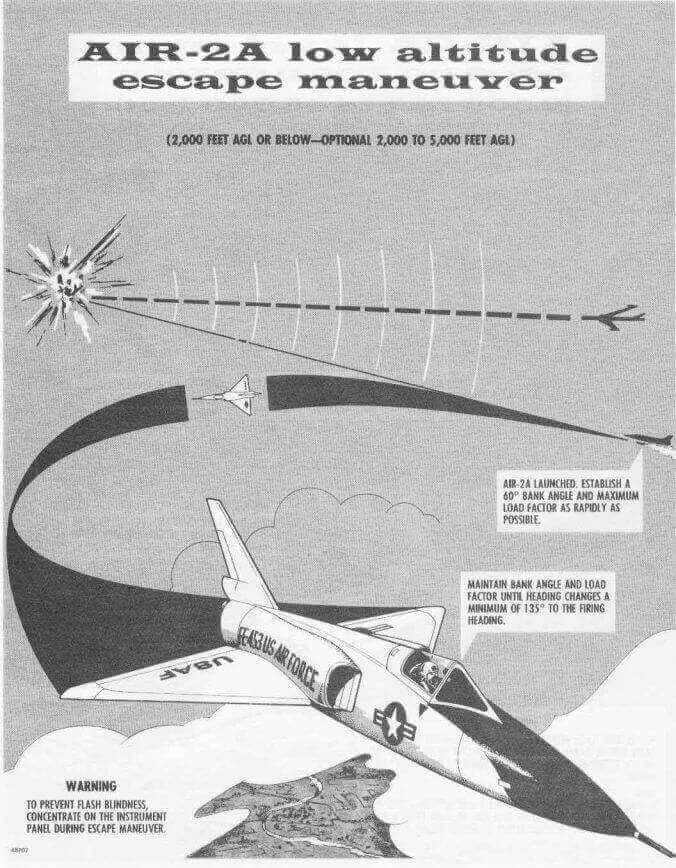 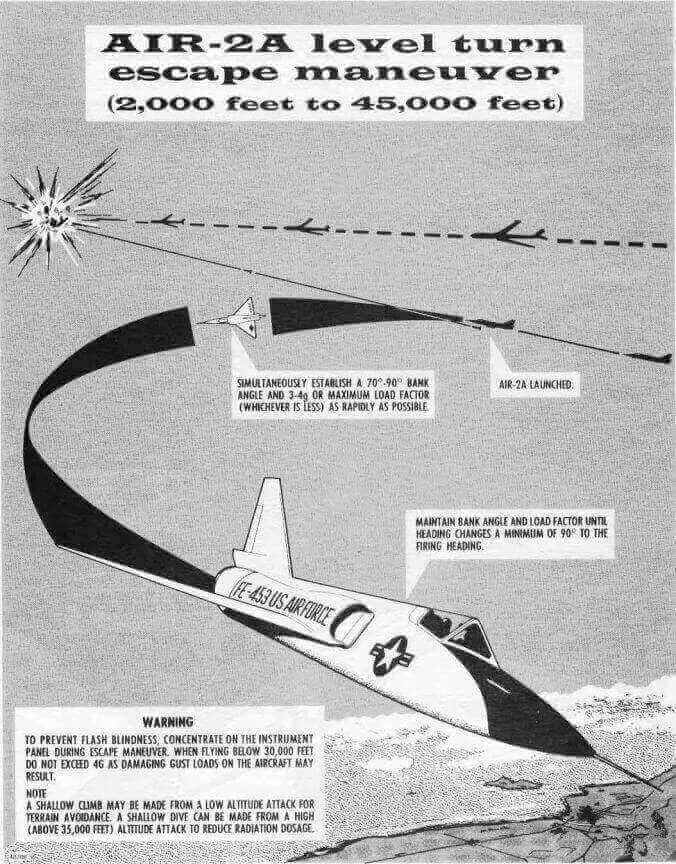 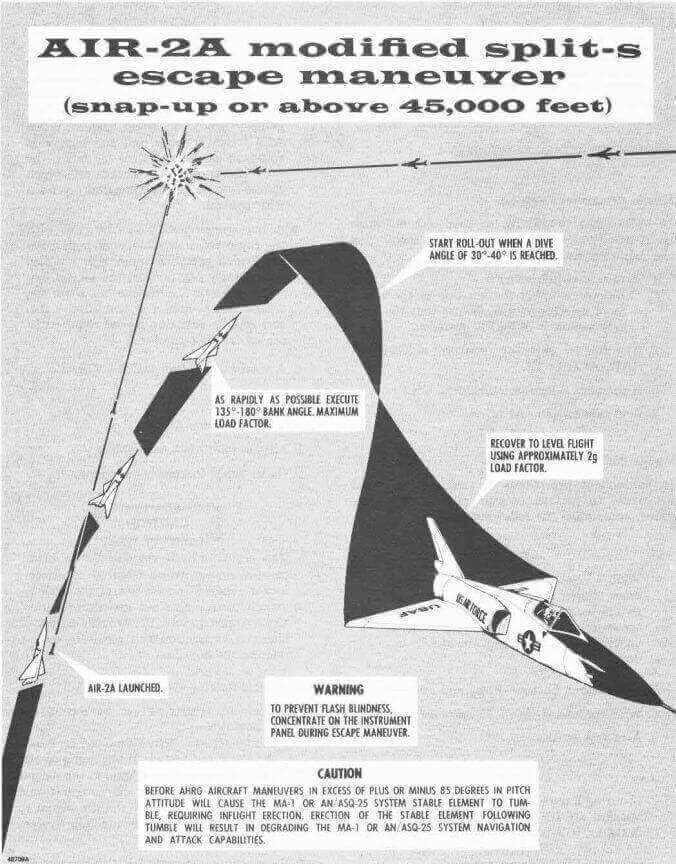 PDF Document:
Investigation of Ejection Releases of an MB-1 Rocket From a 0.04956-Scaled Model of the CONVAIR F-106A Airplane at MACH NUMBER 1.59 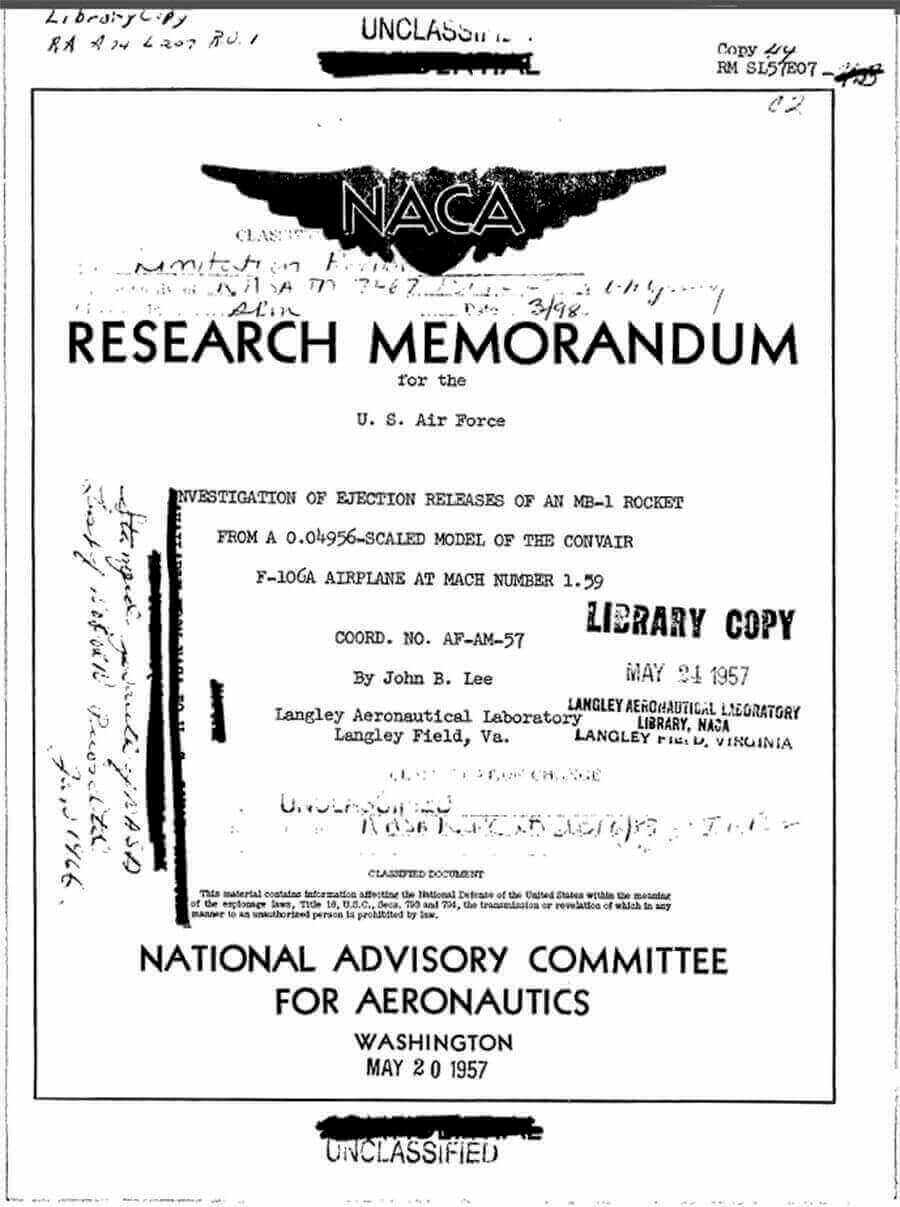 From the Boeing website
The Genie was the world's first nuclear-armed air-to-air weapon and was the most powerful interceptor missile ever deployed by the U.S. Air Force.In 1954 the Douglas Aircraft Co. began work on a small unguided nuclear-armed air-to-air missile and started full-scale development a year later.In 1955 and early 1956, F-89D Scorpion aircraft made the first test firings.

The top-secret project had several code names, including "Bird Dog," "Ding Dong" and "High Card." Finally, it was designated MB-1 and called the Genie.The MB-1 became operational in 1957, and the first and only live firing of a nuclear Genie was July 19, 1957. Powered by a Thiokol SR49 solid-fueled rocket motor,it was armed with a 1.5-kT nuclear warhead and had flip-out fins for flightstability.

F-89J, F-101B and F-106A interceptors carried the Genie. The firing aircraft had to pull away in a sharp turn to escape the blast after launching the weapon,a challenging feat for subsonic fighter jets.

In June 1963, the Genie rockets were designated in the AIR-2 series. The MB-1 became the AIR-2A, the MB-1-T was the ATR-2A, and the MMB-1 was the AIR-2B. The training rocket wasofficially designated ATR-2A and also known as ATR-2N.

Douglas built more than 1,000 Genie rockets before terminating production in 1962. However, in 1965, Thiokol began producing a motor for the AIR-2 with a longer life spanand wider firing temperature limits. After the mid 1970s, upgraded Genie rockets were designated AIR-2B.

The Air Force removed the last AIR-2 rockets from the inventory during the early 1980s.

The Genie Air-2A and MB-1 was an unguided rocket. It had safety features to prevent inadvertent detonation. The rocket motor would not fire unless a landyard pulled a pin during its dropfrom missile bay. Then the engine would fire. The MA-1/AN-ASQ25 would set the parameters for rocket at ‘C’ time during launch. That set the most important parameter the "Time of flight"before detonation. The warhead had to have all of the right parameters, as well as pull 4g, before another pin was pulled allowing nuke detonation after ‘time of flight’. It took all ofthese to allow for detonation. So the guy on the ground with a hammer pounding on the warhead would not set it off, nor would hitting something before it's time of flight.

The normal ‘time of flight’ was 6 - 8.5 sec (parameter set by charging a capacitor bank). The concept was that bombers flew in groups, and that a detonation in a group would be very effective.The enemy bomber would not even have time to react to a minimum time of flight attack. The escape procedure for the F-106 after deploying MB-1 was to do snap roll and pull max G pull to getstarted on turning away from the blast. The six would then ride the shock wave away from the blast like a giant surf board. Most pilots figured it was a last ditch hope to not be part of blast.The weapon would be useless for ground targets.